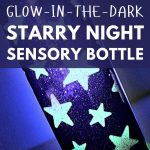 This gorgeous starry night sensory bottle is made using small stars that glow in the dark when charged under a light source! It’s the perfect night-time calm-down bottle to help kids fall asleep, and the glow from the stars will fade on its own as they doze off!

We can’t get enough of sensory bottles. They’re so beautiful, and there are so many fun ways to customize them!

We’ve been making them for over a year now and we have a ton of glitter-filled calm-down bottles. But since we want to make our bottles unique, we’ve also experimented with various combinations of water, glue, baby oil, corn syrup and hair gel to observe the difference in how they behave.

We’ve filled our bottles with pom-poms, straws, water beads, magnetic chips, loom bands, seashells and pretty much anything else you can think of, and we now have a huge collection of one-of-a-kind bottles sitting on a shelf in our kitchen whenever they’re not in use!

This starry night sensory bottle is one of my four-year-old’s favourites. It’s made using stars that glow in the dark for a while after they’ve been exposed to light, so she loves to keep it on a shelf in her bedroom while she falls asleep.

And since the stars only glow for a finite amount of time before they need to be recharged, the light fades on its own as she dozes off!

How to Make a Starry Night Sensory Bottle

Note: For safety reasons, I highly recommend sticking with plastic bottles rather than glass if you have young children. The ones I linked to are made of plastic and in my experience, they don’t break easily when dropped.

Pour in a couple tablespoons of tap water, then add a squirt of glow-in-the-dark paint, a couple drops of purple food colouring and some fine glitter.

Because the gel is so thick, the tap water helps the paint, food colouring and glitter spread more evenly throughout. But be careful not to add too much water or the stars won’t stay in position once the bottle is finished!

Use the chopstick to mix everything until it’s well combined.

The colour should be darker than what’s pictured—I only added one drop of food colouring and ended up having to add more later to achieve the right colour.

It’s a lot harder to mix once you’ve added more hair gel, so I really recommend adding enough food colouring right from the start. But if ever it turns out that you didn’t add enough, no need to worry! Just check out my troubleshooting notes below to find out how to fix it.

Leave a tiny bit of room at the top of the bottle so it doesn’t overflow, then start adding glow-in-the-dark stars.

Here are the ones we used:

They’re meant to be placed on your child’s bedroom ceiling, but they glow very nicely inside the bottle when they’ve been exposed to light!

Because the hair gel is so thick, you’ll have to manually position each star by pushing it down with the chopstick. Once you’re done, they should stay where they are due to the thickness of the gel. (If your stars aren’t staying in place, read my troubleshooting notes below.)

I highly recommend starting at the bottom and working your way up to avoid displacing previously-positioned stars when pushing down new ones. I placed mine in rows and alternated small and medium stars to create a pattern.

Once you’ve positioned all the stars, seal the bottle and you’re done! The stars will glow under black light, but they will also glow on their own for a while if you leave them under a light source to charge. This bottle looks so pretty sitting on a shelf in the dark!

The stars will glow under black light, but they will also glow on their own for a while if you leave them under a light source to charge.

They will recharge just fine if the bottle is placed near a window. Don’t leave it out in direct sunlight and forget it there all day—I did this accidentally and was very surprised to see that the sun bleached all of the colour out of the bottle!

The bottle we made last year is still just as dark as when we first made it, so the colour fading was completely avoidable. Lesson learned!

My Stars Won’t Fit Through the Opening of the Bottle!

Unfortunately, you won’t be able to complete this project unless you choose a bottle with a wide enough neck. I highly recommend testing whether the stars fit before you start filling the bottle with hair gel.

Here are the exact products I used, which I know are the right size for this project:

The package of stars we bought actually contained four different sizes, but only the two smallest sizes fit through the opening of the bottle. That wasn’t a problem for us since we were able to use the bigger ones to make a matching starry night sensory bag and still have plenty leftover for other projects!

Because the gel is so thick, it can be hard to get the food colouring all the way to the bottom once the bottle is full. For this reason, I recommend using a minimum of two to three drops of colouring every time you add hair gel. This will ensure that you end up with a colour that is nice and vibrant!

When I was creating the bottle pictured in this article, I made the mistake of only adding one drop of food colouring per squirt of hair gel. That’s why the colour appears so light in the first few pictures.

If you make the same mistake that I did, just wait until the bottle is about three quarters full, then add several more drops of food colouring and shake the bottle vigorously until everything is well combined. This is pretty much the only way to get the colour to go all the way to the bottom if you didn’t add enough to begin with.

If you think you’ll need to do this, keep in mind that it won’t work unless there’s still some empty room at the top. So make sure you’re happy with the colour before filling the bottle completely, or you may end up having to remove some of your hair gel mixture! (Tip: Instead of wasting any ingredients you have remove, use them to make a sensory bag!)

My Stars Won’t Stay in Position!

If your stars are moving around, you probably added too much water to the hair or sports gel. It could be that the gel you used wasn’t as thick as mine and needed to be diluted less, or even not at all.

If this happens, you’ll have to dump out some of the contents of the bottle and replace it with undiluted hair gel. Depending on the quantity you’re throwing out, you can also add a bit more food colouring, glow-in-the-dark paint and glitter to avoid lightening the colour too much.

I recommend leaving some empty room at the top of the bottle and shaking it vigorously to combine the ingredients. This is pretty much the only way to get the ingredients from the top all the way to the bottom, and you’ll want the extra hair gel to be spread evenly throughout. If the mixture is only thicker at the top, the stars nearer to the bottom will continue to move out of position.

Once you’ve combined the ingredients well by shaking the bottle, top it off with some more gel, food colouring, glow-in-the-dark paint and glitter. Stir these ingredients using a chopstick and start positioning your stars, checking to see if they stay in place.

Don’t want to throw out part of the mixture? Not a problem! Just reuse it by throwing it into a freezer bag and using it to make a Starry Night Sensory Bag!

Do you love sensory bottles as much as we do? If so, you may be interested in this article:

I also recommend trying these super-simple DIY fairy jars made using glow stick liquid. Our kids love them and the light also fades as they fall asleep. We bought a large pack of glow sticks from Amazon specifically for the purpose of making them, and we keep it on hand for whenever the kids request them!