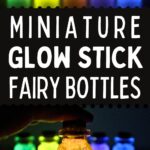 Do your little ones love fairies? Delight them with these super simple glow stick fairy jars! These miniature glow jars come together in under five minutes, and they make great DIY night lights or fairy garden lanterns. Such a fun and easy glow-in-the-dark craft for kids!

Do your kids love fairies as much as ours do?

I’ve been meaning to start a fairy garden with them for a while now. I’m sure they would love it. But given how young our kids are, I’m not sure how much they would be able to participate… so I think I’ll save that one for when they’re a little older.

Thankfully, in the meantime, we have this super simple fairy jar craft to fall back on!

Making your own fairy jars with glow sticks takes under five minutes, and our kids absolutely love them.

If I’m being honest, I love them too. They’re completely magical. It’s hard believe that all it takes is a glow stick and some glitter to make these amazing glowing fairies in a jar from dollar store supplies.

And while the steps below should be completed by an adult, my children always enjoy watching the fairy jars come together—and of course, keeping them in their rooms as they fall asleep!

How to Make a DIY Fairy Glow Jar

Here’s what you’ll need to make a simple glowing fairy jar at home in under five minutes:

Note: We decided to make our glowing fairy jars miniature for practical reasons, but feel free to use a larger recipient like a glass mason jar. Just keep in mind that if you do choose a larger container, you will need to use a larger glow stick as miniature glow sticks don’t contain enough liquid to cover the sides of a regular-sized mason jar.

Start by grabbing a miniature glow stick and cracking it to make it glow. The pack we bought includes several different colours, so we typically let our kids choose whichever colour they like. (Purple gets chosen a lot!)

Once the glow stick is glowing at full strength, use a pair of sharp scissors to cut off the tip.

Because the glow sticks are so small, I have found that the liquid is difficult to pour when only one tip has been cut off. For this reason, I usually cut off both ends to make it flow better.

If you choose to do this too, just make sure to keep the glow stick in a horizontal position to avoid spilling the liquid everywhere.

Once one or both tips have been cut off, it’s time to pour. Tilt the glow stick and pour its content into the jar or bottle that you are using to make this craft.

When you are done pouring, feel free to discard the empty glow stick as you won’t be needing it.

Use a small spoon to pour a bit of iridescent glitter into the bottle with the glow stick liquid.

I added about three or four tiny scoops. Just make sure you don’t add too much—you can always add more if you see that it isn’t sufficient, but you can’t remove it once it’s in the bottle except by dumping it all out and starting over with a different glow stick.

Note: Make sure to use iridescent glitter, not regular coloured glitter. Iridescent glitter is translucent rather than opaque, which will allow the light from the glow stick liquid to shine through. We bought a large container from Walmart, but it’s also available on Amazon.

Seal the jar or bottle and gently shake it in every direction until all the sides are covered with glitter. If you see that there isn’t enough glitter, open up the bottle to add a bit more, then seal it up again and continue shaking it to help the glitter adhere to the glass.

Once all the sides of the jar have been covered, the mini fairy jar is ready to use! Simply turn off the lights and watch the magic happen.

Our kids can’t get enough of these simple little glow stick fairy lanterns. They are so easy to make, but they look totally magical—like having actual glowing fairies in a jar. They would make a great addition to any DIY fairy garden at dusk.

You can also use these glow-in-the-dark fairy jars as DIY night lights. They glow very brightly when you first make them, but the light eventually fades, just like it does with glow sticks. This means that the glow from the fairies in a jar will slowly fade as your child falls asleep.

We had several colours of glow sticks, so we used them to create a rainbow assortment of fairies in a jar. The kids loved seeing all the colours.

The amount of time that they will glow for will depend on the brand of glow sticks you buy. We have found that ours begin to fade after 20 minutes or so, but it takes several hours for them to stop glowing completely.

(We’re still working our way through a pack of 100 glow sticks that we bought several years ago, so it’s quite possible that 20 minutes in on the lower end of the spectrum and that it will take longer before yours starts to fade.)

Can you reuse containers that have been used to make fairy jars? We have found the answer to be yes—as long as you clean them properly.

Because the bottles we use are so small, they can be a little difficult to clean. The key is to add a few drops of dish soap and to fill them with hot water. Then, let them soak for a little bit, gently shaking the bottles to loosen the glitter.

Once the glitter has fallen to the bottom of the jars, use warm water to rinse them out. (You can press the bottle opening onto a paper towel to catch the glitter and dispose of it in the trash if you want to avoid pouring microplastics down the drain.)

Just make sure to clean the glow jars as soon as possible if you’re planning on reusing them. We usually do it first thing the next morning because the longer the glitter is left inside the jar, the harder it will be to clean and the higher the likelihood that you will have to throw out the bottle and start fresh.

Do your kids love project that glow in the dark? Check out these articles:

You can also sign up for my newsletter to receive fun craft and activity ideas right in your inbox! Subscribers gain access to my free printables library as well as to fun bonuses that will never be available on my site!