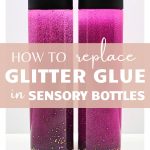 Sensory bottle recipes often call for glitter glue, but if you don’t have any on hand or are looking to cut costs, can you recreate its effect using fine glitter and clear glue? I tested it out so you don’t have to!

My kids and I can’t get enough of sensory bottles. They’re so simple to make and so gorgeous!

You can use them as a way to help your little ones manage their emotions, as a vehicle for mess-free sensory exploration, or even as a soothing timer for when your kids are on a time-out. My kids sometimes ask for them when they’re upset, then simply lie down in bed or on the couch and swish the contents around to calm down.

And to be perfectly honest, I find them so mesmerizing that even when the kids aren’t around, I’ve been known to place one on the counter and give it a shake so I can watch the glitter settle as I cook or clean up!

Recently, I’ve come across a few sensory bottle tutorials that call for regular clear glue and fine glitter. But when I first started making sensory bottles, it seemed that every tutorial I found called for glitter glue.

I didn’t have any glitter glue and found it pricey, so I tried to find information online about whether I could use clear glue and fine glitter as a substitute. When I didn’t find anything useful, I decided to try it out. And because it worked out just fine, I went on to use that method for all the bottles that I subsequently created.

But a part of me always wondered whether I was missing out by not using glitter glue!

If you’ve been wondering the same thing, you’ve come to the right place. In this article, you’ll see my attempt at creating two identical sensory bottles: one with glitter glue and the other without.

I’ll discuss the differences between the bottles, compare the price of both methods and try to determine whether you can use clear glue and fine glitter to recreate the same effect as glitter glue in a sensory bottle.

Note: If you’re not interested in the experiment itself and only want to know the results, you can skip to the end. I’ve bolded the questions that I wanted to answer and summarized my conclusions!

I started off my experiment with:

My first step was to pour a little bit of glitter glue into one of the bottles.

Note: This was actually my second attempt—the first time I tried to do this experiment, I used way too much glitter glue and ended up with a bottle full of diluted glue that wouldn’t settle! It’s been several weeks and the glitter is still suspended, even after I tried dividing it into two bottles and adding more water. Clearly I’m going to have to find another use for it!

I then poured the same quantity of clear glue into the second bottle.

Next, I topped off both bottles with hot water.

After stirring them both with a chopstick, I added 1 teaspoon of glitter to the second bottle. I really recommend adding glitter only once the glue is diluted with water. If you pour it right onto the glue, it has a tendency to form clumps that are really difficult to break up!

The first thing I noticed was that the consistency of the liquid was completely different. It was very thick in the glitter-glue bottle and very watery in the clear-glue bottle. Perhaps glitter glue is thicker than regular glue? The brand I bought certainly seemed to be.

Since I was trying to make both bottles identical, I topped off the first bottle with water and the second, with more clear glue. That made the consistencies a little more similar. Then, I shook the bottles and watched as the glitter settled.

Whenever I make sensory bottles, I always try to mix several sizes and colours of glitter. They don’t fall at the same speed and it makes the bottles more interesting to look at!

So I decided to add in some chunky glitter in pink, gold and silver, pouring about the same amount into each bottle.

For the purposes of my experiment, I also wanted to test how the chunkier glitter would behave, but there wasn’t a significant difference between the two bottles apart from what I had already noted.

I had to pause the experiment at that point because it was time for dinner, bath time and bedtime. With three little ones, that takes several hours, and once it’s all said and done, there’s rarely enough time to do anything else.

But I knew I wanted to play around with the bottles some more the next day, because I had set out to create two identical bottles, so “similar” wasn’t going to cut it!

What I didn’t notice was that the consistency of the liquid had changed overnight! The glitter-glue mixture had become more watery and the clear-glue mixture seemed thicker in comparison.

My guess is that since glitter glue is thicker than regular glue, it takes longer to dissolve, which is why the glitter had stayed suspended for longer the previous day. By replacing some of the liquid in both bottles, I ended up with a clear-glue bottle that kept the glitter suspended for way longer than the other. Oops!

I waited for it to settle, replaced some of the liquid in the clear-glue bottle with hot water, and ended up with this:

The glitter was settling at almost the same speed!

So as you can see, the bottles aren’t quite identical. Nevertheless, I felt comfortable enough stopping the experiment at that point to draw my conclusions!

Were the Bottles Identical?

Not quite. Once I adjusted the amount of water and glue in the bottles, the glitter fell at about the same speed, but in the glitter-glue bottle, it dispersed more as it fell.

It’s possible that I added a little too much fine glitter to the clear-glue bottle and that this accounts for the difference, but it’s possible that it has something to do with the consistency of the glue.

I did notice that in the glitter-glue bottle, the liquid seemed to have a more even weight throughout (after a 24-hour resting period to allow it to properly dissolve), while the clear-glue bottle seemed heavier at the bottom, as if some of the glue hadn’t properly dissolved and was pooling there.

This might have something to do with the thicker consistency of the glitter glue. In order to make them both fall at the same rate, I had to add more glue to the clear-glue bottle, so it’s possible that it didn’t dissolve properly.

I might try to repeat this experiment using the same brand of glitter glue and clear glue to see if that changes anything. If I do, I will update this post with the results!

How Noticeable Were the Differences?

The differences were somewhat noticeable when the bottles were placed side-by-side, but in the grand scheme of things, the two bottles were pretty similar.

If that’s something you consider important, then definitely choose the option that works better for you. Otherwise, just use whatever you have on hand!

Did You Use the Same Proportions?

No. I found the glitter glue to be much thicker than the clear glue, so I had to use much more glue in the second bottle in order to give the liquid a similar consistency.

I did notice, however, that the glitter glue took longer to dissolve, but stopped feeling as thick once it was done dissolving, so perhaps waiting until the glitter glue had completely dissolved before making the clear-glue bottle would have made the two easier to compare.

I’m sure other brands of glitter glue don’t have precisely the same consistency as the one I used, so I don’t think replacing it is an exact science. It really depends on the flow that you’re trying to achieve, and as long as you’re satisfied with the results, it doesn’t really matter how you got there!

That really depends on the price you pay for glitter glue, clear glue and fine glitter.

When I first started looking for glitter glue, I mostly just came across Elmer’s. Since it was pretty expensive, I wanted to find a cheaper alternative.

Since then, I’ve encountered many different brands and prices—perhaps as a result of the slime craze? The one I used for this experiment came from the dollar store, but it had a very similar consistency to the one I used in my first (unsuccessful) attempt, which you can find below and which is a lot pricier.

Since I bought dollar-store glue and used only a small amount, the cost was probably about the same for both bottles, but using fine glitter might have saved me money if I had used more expensive glitter glue.

And since you’ll be needing more glue if you use clear glue and fine glitter, I highly recommend buying your clear glue in bulk so you don’t end up spending more on clear glue than you would have on glitter glue!

Which One Should I Use?

Taking into consideration the factors discussed above, the cost and results were pretty comparable, so I would suggest you just use whatever you have on hand!

No matter what you use, you’ll have to play around with the proportions until the bottle’s flow is to your liking. If you find that the glitter is falling too quickly, dump out some of the liquid and add clear glue. If you find it’s falling too slowly, add water instead.

You can also play around with the amount of glitter. In this case, I added more than I usually would have because I was trying to imitate the effect of the glitter-glue bottle, but I find that a little goes a long way, so I generally start with a lot less and add some as needed.

So it really depends on your preference! But if ever you find yourself wanting to make a sensory bottle and don’t have any glitter glue on hand, don’t sweat it. Regular glitter will work just fine—and depending on what’s available in your area, it might even save you money!

Love sensory bottles as much as we do? Check out this article: