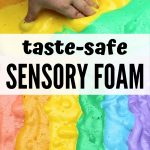 Does your baby or toddler like to put everything in their mouth? If you’re looking for an alternative to soap foam, this taste-safe sensory foam is the perfect solution! It’s baby-safe, toddler-approved and super simple to whip up—and best of all, you’ll only need two edible ingredients to make it!

I think my habit of creating taste-safe sensory materials is starting to make an impression on our four-year-old.

Lately, she’s been saying things like, “Can we use Jell-O to make something to play with?” And, whenever I make something she’s never seen before, she immediately asks, “Is it safe to put in my mouth?”

I do wish she and her sisters would spend a little less time eating our sensory materials, since they’re not really meant to be snacked on. But I’m glad that they enjoy the activities we’ve been doing, and knowing exactly which ingredients they’re putting into their mouths is a big relief given their food intolerances.

We started making Edible Water Beads a little while ago and they’ve been asking for them pretty frequently. So I wanted to find another fun material we could use for some taste-safe sensory play!

Bubble foam seemed like a fun idea to try—but with a baby and two toddlers at home, we’d rather not make soap seem too appealing by using it during play. So we decided to make some baby-safe sensory foam instead!

You may be wondering how you can make play foam that’s safe for your baby to play with. If so, this taste-safe foam recipe would be perfect for you!

The secret ingredient is aquafaba, which is the leftover liquid you’ll find inside a can of chickpeas. It’s often used to replace egg whites in vegan recipes because it can be whipped into a foam that’s very similar in texture to beaten egg whites—which also makes it perfect for sensory play!

So the next time you’re whipping up a batch of homemade hummus, make sure you save the liquid so you can use it to create a taste-safe sensory bin that’s perfect for babies and toddlers to explore!

Because chickpea water keeps for about a week in the fridge, you don’t even need to make the foam right away. Just make sure to keep your aquafaba in an airtight container in the fridge and take it out whenever you have time for this activity!

Note: Because this foam is made from aquafaba, it will smell like chickpeas. But if you open the can of chickpeas and notice an overwhelming smell of spoiled beans, it’s possible that the aquafaba has gone bad. If that’s the case, it shouldn’t be used for sensory play.

How to Make Edible Foam for Kids

Here’s what you’ll need to make some baby-safe foam for sensory play:

Note: Adding cream of tartar helps the whipped chickpea liquid hold its shape, but you can definitely make aquafaba foam without cream of tartar if you don’t have any at home. We buy ours in bulk to make homemade play dough!

In order to make this play foam, you’ll need some large bowls as well as an electric hand mixer. These will allow you to whip the drained chickpea liquid into shape.

Start by draining the liquid from a can of chickpeas into a container or bowl using a strainer.

Because several kids were going to be playing with the foam, and because we wanted to make an entire rainbow of colours, I used the liquid from two cans. If you don’t have as many kids to entertain or if you’re not planning on making more than one colour, one can of chickpeas should suffice.

If you’re making several colours like we did, divide the aquafaba into as many different containers as the colours you’ll be making—we divided it into six to make rainbow foam!

If you’re only planning on making one colour, you can skip this step and move on to the next one.

Add some food colouring to the chickpea liquid and stir until combined. I used icing gel and stirred it in with a toothpick, but liquid food colouring would work too.

Make sure the colour is nice and dark, because it will look a lot lighter once the mixture has been whipped!

Use an electric hand mixer to whip the coloured chickpea liquid until stiff peaks form. This may take a while, so if the peaks are still too soft, just keep whipping the mixture until it firms up.

You can add a few pinches of cream of tartar to help create a firmer texture (like you would do when beating egg whites), but you can also make chickpea foam without cream of tartar, so there’s no need to worry if you don’t happen to have any on hand.

If you’re making several colours, repeat the previous steps for each colour until all the aquafaba has been whipped. Then, place it on a baking sheet or inside a plastic bin and let your child play!

I had originally placed all the colours in rainbow order, but as you can see, the kids had fun mixing it around—which is totally fine, of course!

We also had fun scooping the edible foam into muffin tins. It was such a relief to know that our sensory play was safe for our little ones and wouldn’t hurt them if they decided to sneak a taste of their “muffins”!

I hope your kids love this activity as much as ours did! I’d love to hear about your go-to taste-safe sensory recipes in the comments!

The Craft-at-Home Family
Does your child like to put everything in their mouth? This play foam is baby-safe, toddler-approved and super simple to whip up—and best of all, you’ll only need two edible ingredients to make it!
No ratings yet
Print Recipe Pin Recipe
Prep Time 10 mins

Cream of tartar will give the foam a firmer texture, but the recipe will still work without it. This taste-safe sensory foam cannot be prepared in advance.
Keyword aquafaba, play foam, sensory play, taste-safe
Tried this recipe?Let us know how it was!

Looking for some more baby-safe sensory materials to make at home? Check out these articles:

You can also join my mailing list to receive fun craft and activity ideas right in your inbox! Subscribers gain access to my free printables library as well as to exclusive content that may never be available on my site.

2.6K shares
2.6K shares
The Craft-at-Home Family uses cookies to ensure you have the best possible experience on our site. Should you reject cookies, certain features and functionalities may not be available to you and certain areas may be restricted. For more details, please view Privacy Policy and our Cookie Policy.OKReject Cookies