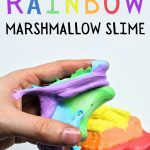 It may be hard to believe, but this colourful marshmallow slime is made using nothing but edible ingredients! It’s super smooth, super stretchy—and lots of fun to play with. Plus, because it’s 100% edible, you can give it to toddlers and younger kids without having to worry!

Our eldest daughter was never one to put everything in her mouth. But even though we’ve never had to worry about her eating soap or choking on water beads, she’s always loved having a taste (or several) of any activity that’s prepared using edible ingredients.

She loves rescuing animals trapped in Jell-O. She loves washing “muddy” farm animals covered in wet cake or pudding mix. And she loves having a taste of whatever sensory materials I’ve created for her younger siblings, who are the sort of children who like to put everything in their mouths.

Some of the activities we try, like Psyllium Husk Slime or Edible Water Beads, are more “taste-safe” than edible—they’re not harmful to ingest, but they also don’t taste great. We mostly make them so that her younger siblings can participate while she plays with “big kid” materials.

But we’ll also occasionally create edible activities that are meant for the whole family. For instance, we had lots of fun making snow ice cream this winter. And now that Saint Patrick’s Day is coming up, I thought this was the perfect time to make some edible rainbow slime!

Here’s what you’ll need to make some colourful (and edible!) marshmallow slime for your kids:

Note: For best results, it’s important that you follow the recipe exactly, especially as far are cooking times and quantities are concerned. I did a lot of experimenting while creating this slime, and the instructions I’ve shared should yield the smoothest, stretchiest slime possible. Please read the notes at the end if you run into any issues.

Start by placing six marshmallows in a bowl with ½ teaspoon of coconut oil, then heating them in the microwave. (Don’t add too much coconut oil or you’ll have trouble stirring the marshmallows once they’re melted!)

I heated mine for about 30 seconds at full power. You’ll want to heat the marshmallows long enough to soften them up for stirring, but not so long that they start to cook. Overheating the marshmallows will make your slime lumpy and stiff.

Use a small spoon to stir the melted marshmallows. If you’re having trouble stirring them, you can place the bowl back in the microwave for a few seconds to make it easier—but be sure not to overcook them if you want your slime to be smooth and stretchy!

Add a bit of food colouring and stir until well combined. Make sure the resulting colour is nice and bright.

Add 1 tablespoon of cornstarch to the bowl and stir it in with a spoon. You may have trouble working it all in, but don’t add any less than 1 tablespoon or your slime will end up too sticky.

Once you’ve gotten as far as you can with the spoon, use your hands to knead the slime and work in as much cornstarch as you can. Feel free to cover your hands with a bit of coconut oil to make it stick less.

As you’re kneading the slime, slowly add about 2 teaspoons of coconut oil and work it in with your fingers. This will make the slime stretchier and less sticky.

When you’re done with your first batch, place the slime on a plate or in a bowl (you can cover the bottom with cornstarch to prevent it from sticking) and repeat the previous steps five times to create six different colours. We used purple, blue, green, yellow, orange and red.

After all six colours of slime have been created, stretch each one into an elongated shape and arrange them all in rainbow order one next to the other. If placed close together, they should stick to each other and form one large blob of rainbow slime!

(Note: You may have noticed that in the above picture, some of the colours don’t look as smooth. This is because I was experimenting with different proportions and cooking times to come up with the best possible recipe for you. Provided you follow my instructions, your slime should look more like the blue and purple colours!)

Once your colours have been arranged into a rainbow, give the slime to your child to play with! The colours may eventually blend together, but that actually requires a surprising amount of playing!

You can’t really tell from the pictures, but as long as you followed the directions exactly, your slime should be super stretchy and smooth. My four-year-old had fun stretching it several feet across the dining table!

I’m just glad I took a few pictures before handing the slime over to my kids, because they were way too excited to let me photograph them. And of course, they all enjoyed taking a nibble once in a while as they played!

Having trouble with your slime? Here are some answers that may help!

How Do I Store It?

If the slime is still usable when your kids are done playing with it (and if they didn’t spend too much time licking it or putting it in their mouth), you can place it in an airtight container in the fridge and take it out again the next day.

The slime will likely be hard when you take it out again, but you can solve this issue by heating it in the microwave in 10-second increments until it’s stretchy again. Just make sure not to overheat it! (We found that about 35 seconds worked perfectly in our microwave.)

My Slime Is Lumpy!

If your marshmallow slime is lumpy instead of smooth, you probably overcooked the marshmallows during the first step.

You only need to heat them enough to make them stirrable—if you heat them so much that they start cooking, the parts that are cooked will form lumps as they cool down. Try making another batch and reducing the heating time.

My Slime Is Stiff!

This is most likely also due to overcooking, but it could also mean you didn’t add enough coconut oil. Try working in some more coconut will your fingers—and if that fails, then you’ll want to make another batch and reduce the heating time.

My Slime Is Too Sticky!

Keep in mind that the cornstarch may be harder to work in at this stage, so you’re better off adding more right off the bat when you make the next colour!

Do your kids love to put things in their mouths? Check out these taste-safe sensory activities:

You can also join my mailing list to receive fun craft and activity ideas right in your inbox! Subscribers gain access to my free printables library as well as to fun bonuses that may never get posted to my site!