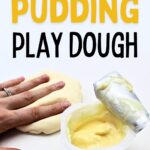 Does your toddler like to put everything in their mouth? If so, this homemade pudding dough would make a great alternative to salt-based play dough. Not only is it taste-safe, easy to make and super soft, but it requires no cooking and only calls for two simple ingredients!

It seems like every other day that I’m trying out a new play dough recipe for the kids… so it stands to reason that pudding play dough would eventually be one of them.

Most of the recipes I’ve seen call for instant pudding mix, cornstarch and water. They seem simple enough to make, but getting the quantity of water exactly right can be a bit tricky. Also, since every recipe calls for exactly ¼ cup of pudding mix, you’ll probably end up with a little bit extra.

I don’t know about you, but the last thing I need is a half-empty box of pudding taking up room in my pantry—which is why I’ve been looking for a simpler way to make edible play dough with pudding.

So when it occurred to me the other day that using a pudding cup would not only eliminate the need for water, but would also mean I wouldn’t have to measure the quantity of pudding or store the leftovers in the pantry, I was excited to try it.

Not only did it work out perfectly, but it also had a wonderful texture as well as a subtle but pleasant scent. We will definitely be adding this recipe to our regular repertoire… and I hope that once you try it, you’ll love it just as much as we did!

Note: If your kiddos love slime, you can tweak this recipe to make taste-safe pudding slime by reducing the quantity of cornstarch and adding a bit of coconut oil to help make it more stretchy.

You can also add food colouring (or even some Kool-Aid powder!) if you want to give your play dough a fun colour, but this is totally optional. If you do decide to use food colouring, you’ll get the best results with vanilla pudding since it’s lighter in colour.

Start by pouring the entire contents of a pudding cup into a bowl.

If you want to add colour to your play dough, now is the time. Simply add a few drops of food colouring to the pudding and stir with a spoon until combined.

We decided to skip this step because we liked the beige colour of the vanilla pudding. You can also use chocolate or butterscotch pudding instead of vanilla if you want to switch up the colour and smell without the need for food colouring!

When you’ve gotten as far as you can with the spoon, you set it aside and knead the ingredients with your hands.

Keep an additional ¼ cup of cornstarch nearby as you knead, and add it to the pudding dough, one tablespoon at a time, until the dough is no longer sticky and you’re happy with its consistency.

Once that happens, your homemade pudding dough is ready! Just give it to your child to play with and watch them have fun.

As far as edible play dough goes, this one had an AMAZING texture.

It was super soft and really easy to flatten with a rolling pin—sort of like the frosting play dough that we made a little while back, except pudding is easier to work with, and you don’t need to measure out its quantity because it already comes pre-portioned inside a cup.

And while this pudding dough is technically “edible” because it’s made from edible ingredients, it doesn’t taste great. (“Taste-safe” might be a better term to describe it.)

This means that you can give it to toddlers who like to put everything in their mouth without worrying that it will harm them, but they won’t actively want to eat it because it mostly just tastes like cornstarch. Win-win!

Because this play dough is made from edible ingredients, it doesn’t last as long as regular play dough and will need to be thrown out after a few days. It also dries out pretty quickly, as play dough made with cornstarch tends to do.

To make it last longer, store it in a sandwich bag or airtight container in the fridge when not in use. You’ll also want to make sure that your kids have clean hands whenever they play with it, and you’ll need to discard any play dough that looks filthy.

If ever you find that the play dough has dried out too much, you can always try reviving it by working in a bit of vegetable or coconut oil with your fingers. But do try to keep your expectations realistic as edible play dough is really meant to be more of a one-time-use sort of activity!

The Craft-at-Home Family
Do your kids like to put everything in their mouths? If so, this easy pudding dough would make a great alternative to traditional salt-based play dough—and it only requires 2 simple ingredients!
No ratings yet
Print Recipe Pin Recipe
Prep Time 5 mins

Keyword cornstarch, play dough, pudding, sensory play, taste-safe
Tried this recipe?Let us know how it was!

Looking for more DIY play dough recipes that won’t harm your child if they decide to sneak a bite while they play? Check out these articles: